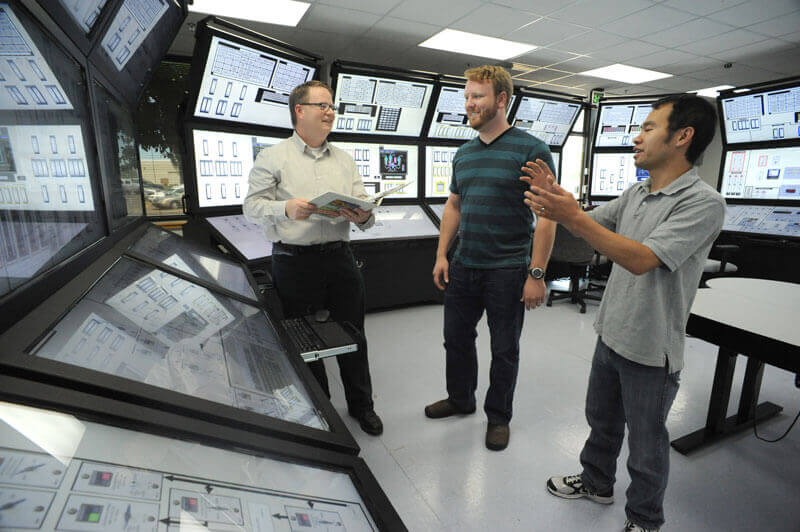 The project has deployed digital technologies, using a simplified nuclear control room environment, to demonstrate advanced reactor control concepts such as integrated hydrogen production and microreactors in order to develop innovative systems to measure operator performance. The project dates to 2014, when Lew and Ulrich were UI graduate students working as INL interns and collaborated with INL researchers including Boring on research focusing on control room modernization. After quickly developing new capabilities at INL, including the ability to prototype new control systems, the team decided to tackle the topic of human reliability analysis, a regulated form of risk analysis. Human reliability methods had not kept pace with digital technologies, and the team saw the opportunity to use the prototyping tools to gather first-of-a-kind data on operator performance. The team was awarded INL Laboratory Directed Research and Development funds in 2017-2019 to develop a testbed for human performance with digital technologies. Ulrich focused his dissertation topic on this (under Werner’s supervision), and the team developed a simplified simulator for testing psychological phenomena related to control operations. DOE awarded copyright jointly to INL and UI for the code to the simplified simulator environment, and the simplified simulator was awarded funding to participate in the Energy I[nnovation]-Corps program, the first time UI participated in the program. This collaboration went on to fund four additional graduate students at UI (to date) and is now one of the code bases for demonstrating advanced reactor control concepts like integrated energy hydrogen production and microreactors. It is also the basis of joint projects for the Department of Defense between INL and BSU. Close collaboration continues to this day between INL, BSU, and UI. The entire series of projects, now spanning millions of dollars in funding, would not have been possible without the opportunity for close partnership between INL and these universities.